01 Feb Break away for some early spring biking! 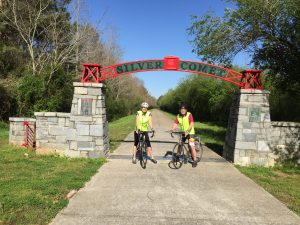 –inspiration for a cold winter day by David Beier

We are getting close to the time of year that bike riding is something we can look forward to. For those who ski or do indoor exercise the need to bike is somewhat less intense.  My solution to riding in the spring is to go south. When planning these trips I tend to focus on rails-to-trails bike rides. These paths are flat and void of traffic, which make them great options for early riding.

The trips I have planned generally take place in April and in the area south of Columbus, Ohio, and north of Atlanta, Ga. Weather in April in this area is usually warm enough to ride comfortably, and rain has not been a problem. Reservations for rooms are generally easy to get so room options are good. The people in this area are friendly and we always felt welcome. Like in the U.P., dining options in the rural south can be somewhat limited. During our trip on the Natchez Trace the best meals we had were at the B and B’s where we stayed.

We usually make our first stop in Milford, Ohio. This city is just northeast of Cincinnati and about seven hours south of Petoskey. There is a Holiday Inn Express just off the freeway (make sure to ask for a room facing west for less freeway noise). The good news about Milford is that it offers your first opportunity to ride a bike trail.  Five minutes down the Main Street and across the river is the Little Miami Scenic Trail. It is more than 70 miles long and either concrete or asphalt. After a day in the car a quick easy ride is the perfect way to unwind and start the reshaping of your butt. This ride gets a great rating on Rail to Trails. We ate at 20 Brix, a nice restaurant on the Main Street of Milford.

From Milford we headed to Cave Spring in the Northwest corner of Georgia. This is about a six- and-a-half-hour drive. Cave Spring is about a twenty-minute drive from a bike trail called the Silver Comet/Chief Ladiga. This trail starts in Atlanta and goes about 100 miles to the west, ending up in Jacksonville, Alabama. Rails to Trails has some interesting notes on this trail but even better is the website that is available. The Silver Comet is the name given to the trail as it goes through Georgia and when it crosses into Alabama it becomes the Chief Ladiga. We rode most of the trail in Alabama and all but the last twenty miles outside of Atlanta. Most of the trail was very rural and quite scenic. Interestingly it is all concrete and well maintained.

Cave Spring is a pleasant small town. We stayed at the Tumlin House Inn, a great old house a few blocks from the “downtown” area. If you stay at the Tumlin House please note that it is on a busy highway and that asking for a room on the back side of the house would be somewhat quieter. There is also a motel in town. There were two places that we ate; one was a BBQ place and the other was called Linda Marie’s Steakhouse. Both paces had reasonable food. One of our nights in Cave Spring we drove about 17 miles to Rome and had dinner at the Harvest Moon Café.

We had originally planned to spend a night in Hiram, which is toward the Atlanta side of the trail, but a rainy day encouraged us to go to our next cycle location in Greenville, S.C. The trail we were interested in there was the Swamp Rabbit. This 22-mile trail has a fair amount of usage and runs along a river with a very nice waterfall in downtown Greenville. Along the trail is Furman University, a small college with a beautiful campus on which is an offshoot from the Swamp Rabbit trail that adds about a mile to the ride. The city of Traveler’s Rest is at the other end of the trail and has several very popular restaurants. There is a book on bike rides in and around Greenville by Wendy Lynam which we used a lot. One of the rides south of Greenville that we liked was a rolling 22-mile loop that started at Cedar Falls Park. This ride was in Lynam’s book.

We stayed at the Swamp Rabbit Inn, a bed and breakfast in downtown Greenville.  We loved staying here.  It is not like many B and B’s in the south. The kitchen is stocked with almost anything you could think of and you prepare your own breakfast.  The location is a few blocks from the trail and a five-minute walk to downtown Greenville. Main Street in Greenville is a very happening place with many fun restaurants, bars and pubs. North of Greenville is the Hotel Domestique. This is a hotel owned by George Hincapie (Lance Armstrong’s team captain). This is a very luxe hotel, helipad and all, catering to high-end hardcore cyclists. You can book rides from 60 to 120 miles through some grueling hills with a former pro biker and finish off the day with a beer in their very nice bar.  We ate at the restaurant and the food was excellent. 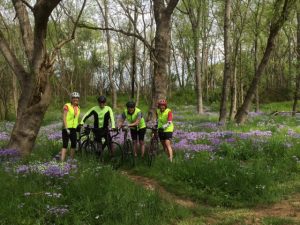 I have ridden the Blue Ridge Parkway numerous times, mostly around the Roanoke/Lynchburg area. We have done some serious research on the area from Asheville north.  Although the parkway forbids trucks and limits speed to 50 mph, traffic can be an issue.  Riding in April eliminates much of the traffic but weekends can still be busy. We were driving on the parkway in April on the first sunny and warm Saturday and all the locals were out. There are several books on biking the route and they have detailed descriptions of the road and elevations.

Asheville is another neat area.  There is an amazing number of breweries and many diverse places to eat. Unfortunately, most of the rides are pretty hilly. There are some nice B and B’s and the downtown is active with plenty of decent restaurants.  We did find one ride that was alongside the French Broad River. We drove down river to Marshall and rode up river until we had had enough and turned around and went back. The one caveat to this ride was that toward the third of the ride closest to Asheville is the county dump. Although there were a few dump trucks they were used to sharing the road. We actually saw a team of cyclists training on this road. Marshall had what looked like some interesting places to eat. Sierra Nevada had just built a large brewery in Asheville.

In the past we have also stayed in Knoxville on our way south. There is a bike path that goes through the city by the river and though is not very long it was fun and allowed you see some of the city by bike.  Columbus, Ohio is another city that has extensive bike trails and is equidistant from Petoskey and northern Georgia and the Carolinas.