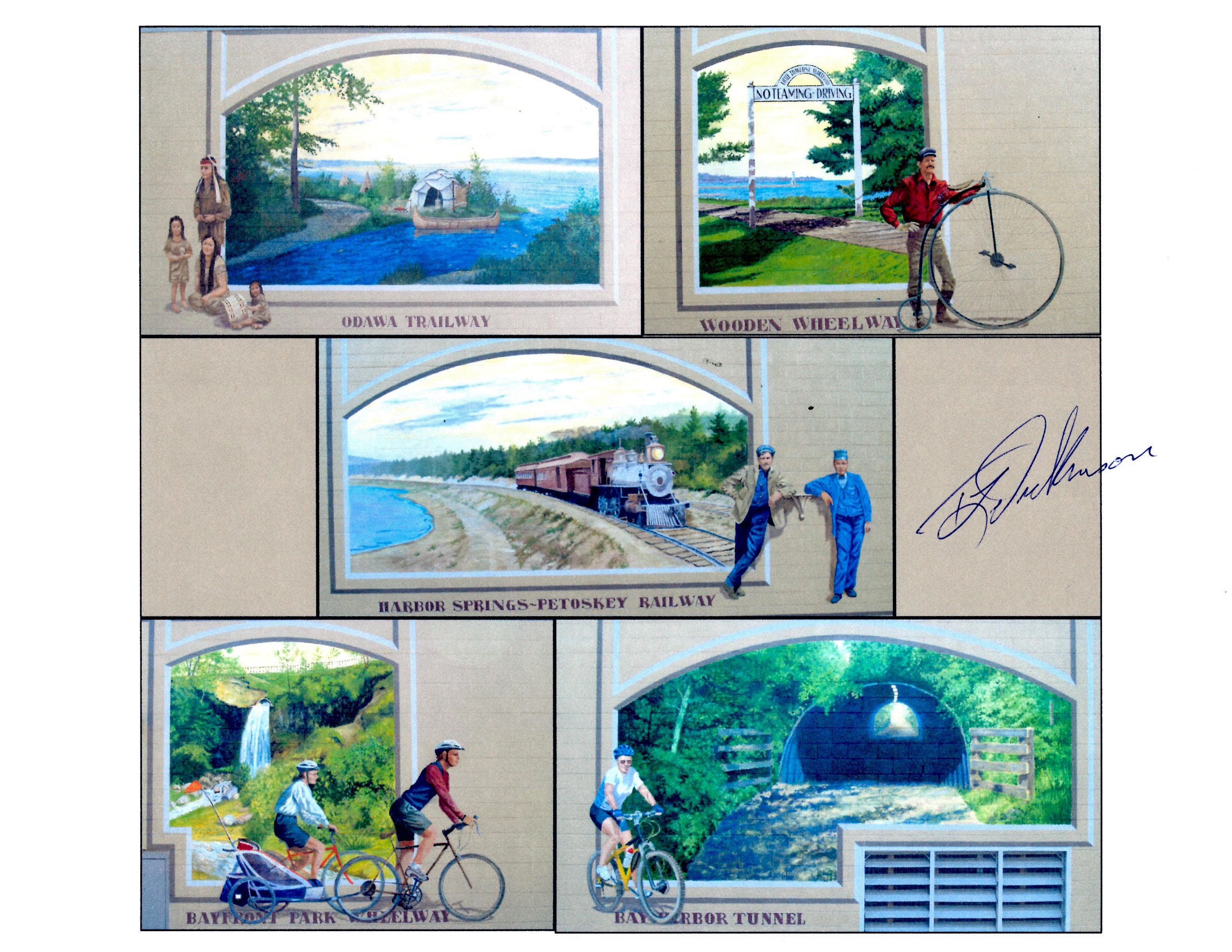 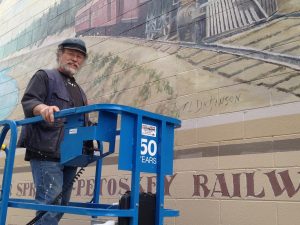 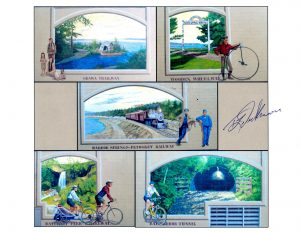 Terry Dickinson touches up the mural depicting the historical phases of the Little Traverse Wheelway on the back wall of D&W Fresh Market in Petoskey. The mural faces the Wheelway at the location of the Tannery Creek Trailhead and the McCue-Fettis Overlook.

An important piece of “art on the trail” was given a new lease on life in Petoskey this week. The “Wheelway Mural,” a series of panels depicting the modes of transportation on the Little Traverse Wheelway corridor throughout its history, was originally painted by muralist Terry L. Dickinson in 2006 on the back wall of what was then Glen’s Market in Bear Creek Township. Dickinson painted panels showing the past and current uses of what is now the Little Traverse Wheelway.

Few users of the trail (and few local residents) understand that the path around the bay, which was first used by Odawa Indians as a trailway, was next used as a bicycle path. When bikes became popular in the 1890s, a wooden “wheelway” was built specifically for use by cyclists, thus the “No Teaming or Driving” signs that are replicated twice on the Wheelway today. Horses were prohibited from using this path.

In the early 1900’s the trail was taken over by tracks for the “dummy train” that ferried resorters from Petoskey to Harbor Springs. The existing trail was developed in the late 1990s and early 2000s, with the most recent section being completed in 2009.

Dickinson’s five panels depict this progression. His original work was funded through grants and gifts, and has provided a beautiful focal point along the trail.

This summer one of TOMTC’s board members, Max Putters, was contacted by the shopping center owners. They had plans to repaint the buildings, and repair some cracks to the edifice. Since Mr. Putters had been involved in getting the mural project going over ten years ago, they were kind enough to ask him if the Trails Council would be interested in touching up the cracks in the mural. Dickinson was contacted to see if he was willing to do the repairs, and he agreed. Funding for this project was approved by the council’s board of directors, and the work was completed this week.

The Trails Council is pleased that this “treasure on the trail” has been preserved so that it can be enjoyed by trail users for many years to come.