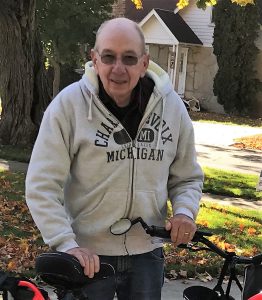 I live in Charlevoix with my wife, Anne.  I have a son, Oliver, who lives in Bloomington, Indiana.  I was born in Indiana and grew up there, in a small town near Fort Wayne.

Anne and I visited the Charlevoix area in our boat about six years ago and really liked the town and entire area.  We purchased a summer home north of downtown Charlevoix and one year later decided to sell our home in Indiana and move to Charlevoix to live here full time.  What attracted us to this area was the natural beauty, the charm of the communities, and the friendliness of the people; but one of the major reasons we chose to move here was the quality of the area bike trails.

For many years Anne and I biked to work and to the stores in Bloomington, which has a long history as a pro-biking community.  Trails were only available in the city of Bloomington, as the state of Indiana does little to build or promote bike trails.  I was so impressed with the quality of the bike trails in Northern Michigan that I wanted to do what I could to help promote and sustain them.  I am involved in the Charlevoix Trail Ambassadors group thanks to Luther Kurtz. Luther submitted my name as a potential board member for the Top of Michigan Trails Council in 2017, and I am proud to serve in that capacity. I believe that it is important for those of us who use the trails to do what we can to support trail organizations like the Trails Council.

My ultimate dream is for the completion of the Charlevoix to Boyne City trail—sooner rather than later!

I appreciate the opportunity to be a part of the Top of Michigan Trails Council.