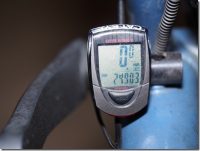 Greg Wheeler recently completed “biking around the world.” He shares his story of overcoming a major injury and coming back to enjoy biking even more than ever.

I just wanted to tell all of you that I reached a fun goal of mine recently. November 15, 2016, Tuesday, I hurried home after work, jumped on the bike, and rode out 3 miles, and then hurried back home to beat the failing light. It gets dark so early now. When I pulled into my driveway, my odometer looked like this photo.

According to a NASA website, the distance around the world at the equator is 24,902.4 miles. As of this past Tuesday, I have now ridden my newer bike around the world in mileage. That might seem a bit trivial so some, but it means a lot to me. That’s all since March 6, 2010 when my odometer read “0” miles. That’s also the day that I tried out the newer bike and then knew that YES, I can ride again!

I felt really good about that since, due to an ATV nearly head-on collision with me on my former bike back in 2009, the doctors in Ohio “thought” I might walk again, but they didn’t now how well, and also I may not be able to work or ride again. Thanks to our Lord God’s amazing healing power, and thanks to a lot of help from many really great people, I can really ride again, and I’ve enjoyed every mile of it!

I forgot to mention that my bike/computer’s odometer doesn’t give a decimal readout, so I had to ride to 24,903 to know I’d reached my fun goal. My next fun goal is to see when my odometer reads 25,600. That will show when I’ve ridden Three times around the world in miles (74,707.2 miles). That will be the total mileages of all four recumbent bikes combined and that’s all starting out on Sept. 26, 1998. I have a far too high energy level!

I should be hitting that mileage goal a bit early during next year’s riding season, providing I stay out of the way of drunks on ATVs! What to do after hitting that fun goal… keep pedaling and see if I make it four times around the world in mileage.

My favorite day ride is to cruise over to Charlevoix and stop at Dairy Grill. That’s a 30-mile trip. The thing that amazes me is how this planet Earth we live on really isn’t so huge like I’ve always thought. It’s fun to do the math: all I have to do is ride to Charlevoix’s Dairy Grill and back home 415 times, and I have gone around the world in miles! 24,902.4 divided by 60 is: 415.04. It really isn’t so big when I think of it that way. 60 miles is just a nice, pleasant day ride for me, I have ridden over twice that far in a day: 134 miles. And I’ve had lots of enjoyment doing it.

I just wanted to send this out to many who know what I went through in 2009. I also send a special thanks to all who helped me and encouraged me through that time, it was rough. I’m doing so well since all that happened earlier, I have a really long list of things I’m thankful to our Lord God for, and not only on Thanksgiving Day, but everyday!