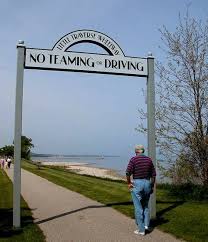 Keith Lamkin, who passed away on July 7, 2017, will be remembered as one of the early advocates for non-motorized trails in Emmet County. I first met Keith when he served as the Director of the MSU Cooperative Extension Service in Emmet County. As a planning consultant to counties in the early 70’s, the extension office was a first stop for me. Keith and I got to discussing community services, which led to the subject of “bike paths” and their intrinsic values to citizens in the community. Keith invited me to attend a meeting of the Little Traverse Bay Kiwanis Club, which had appointed a “Bikeway Committee,” because the Club had adopted bike paths to be their community betterment project. In a way, this was the formative step to nonmotorized trails in Emmet County, bringing together a broad spectrum of community leaders, including Fred Fettis, Dick Brown, Neal McCue and many others.

The Kiwanis Club’s Bikeway Committee grew to become the Little Traverse Wheelway Committee. Keith was an early chairperson of that committee and was skilled in the art of community management/operations. Over time, there were more than 125 persons who volunteered to serve on that committee. Fred Fettis eventually succeeded Keith as committee chair, but both worked together to plan trails around Little Traverse Bay. I was privileged to have worked with these men. The goal of a non-motorized trail “around the bay” has been achieved.