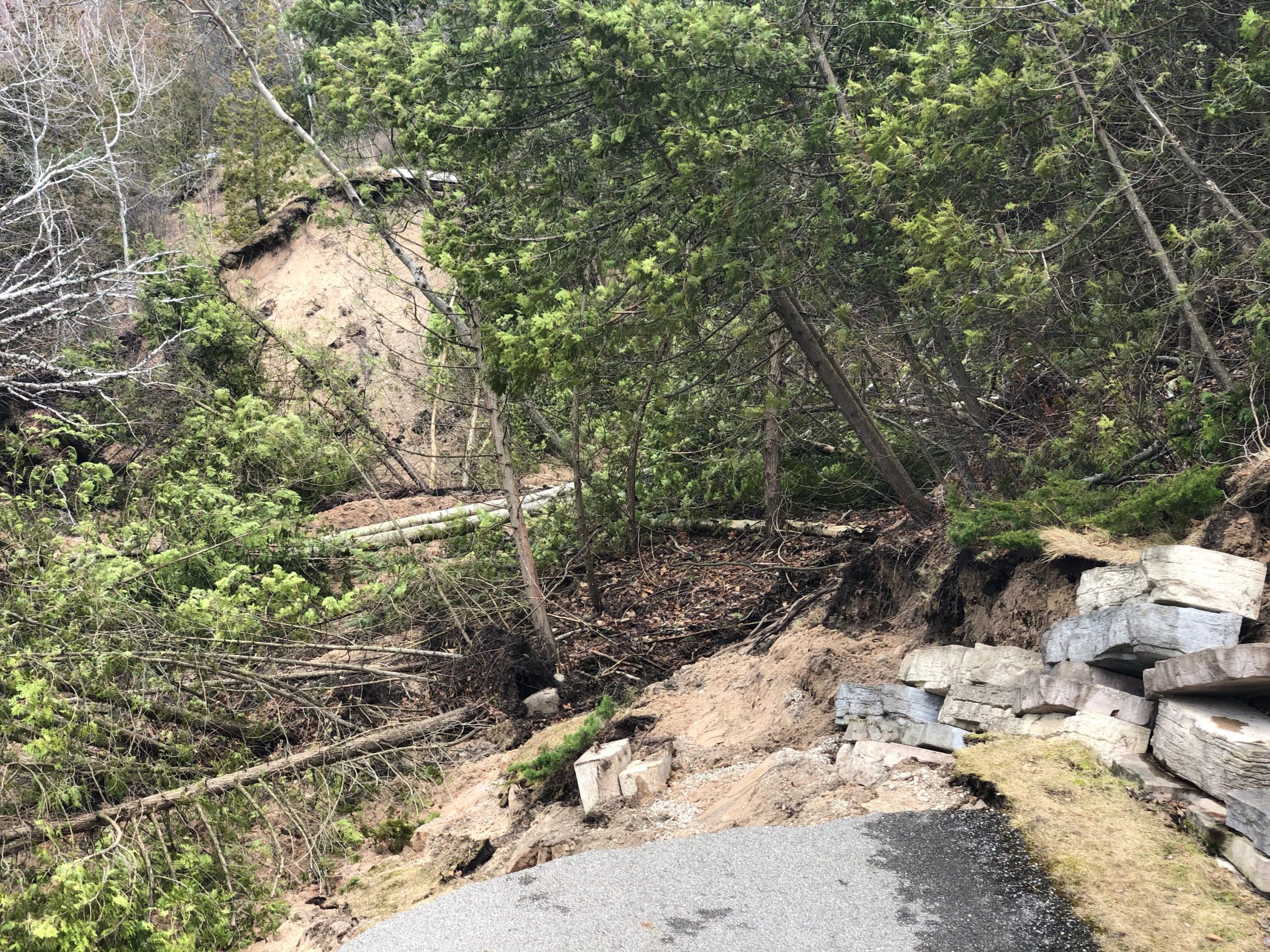 As the calendar turns to March, thoughts up north begin to turn to spring and walking, running, and biking along the Top of Michigan Trails Network in the warm sunshine. With the optimism of spring in our hearts we at the Trails Council thought it would be a good time to update you on our work to restore the washed out section of the Little Traverse Wheelway.

It is hard to believe that it’s been nearly two years since the slope failure on the iconic “Miracle Mile” section of the Wheelway along Resort Bluffs. During that time, the Trails Council and local partners such as Emmet County, Resort Township, the City of Petoskey, and the Little Traverse Bay Bands of Odawa Indians have been working on multiple strategies to address the broken trail connection. An engineering study showed that record high water levels in Lake Michigan, combined with a poorly drained uphill area, destabilized the slope, leaving it vulnerable to the notorious winter wind and waves on Little Traverse Bay.

Luckily, we only lost a short length of trail – the vast majority of the closed section of the Wheelway could reopen as is – but the work to stabilize the slope and plan for a changing climate makes for a challenging project. Our work to restore the Wheelway is continuous, but largely happening “behind the scenes.” During the last two years, the Trails Council has:

So what all is being done to fix this iconic tourist draw and community connection? First, please know that the Trails Council is working every day to restore the Wheelway. Big projects with multiple partners move at a deliberate pace, and even if there isn’t always news or updates the Trails Council and our partners are continuously working behind the scenes.

Second, we have supported the City of Petoskey and the other local partners in looking at ways to address the immediate safety concerns raised by the broken trail connection. We have been advising trail users to originate their trips either at East Park or Bayfront Park to avoid the closed section of trail entirely, but many local (and long distance) riders are using the shoulder of US 31 to get around the closed trail section. The Trails Council and the other local partners funded an engineering study for a “westside connector” that would be a useful new section of trail that could connect Resort Township homes, hotels, and businesses to Petoskey while serving as an alternate route for the Wheelway. That process is nearing completion but so far the engineering needs are more complicated than expected.

Third, the Trails Council has been in conversation with a local design-build firm that has the expertise and experience to repair the Wheelway. They believe the washed out area of the Wheelway can be rebuilt quickly and for a fraction of the cost estimated in the initial slope failure study. The Trails Council is working on ways to bring forward these rebuilding concepts, and solicit other innovative ideas, so stay tuned!

Finally, the state legislature has billions of dollars of federal money to spend this year and the Trails Council is actively working with our local representative and statewide partners to seek funding for reconstruction of the Wheelway. Trails like the Wheelway are vital community connections and local economic drivers, and we know that there is a significant impact to the Emmet County economy. The legislature is organizing several different priority funding packages so that hospitals, housing, roads, parks, etc. all get consideration without competing against each other for dollars.

As you can see, there are a lot of irons in the fire to get the Wheelway restored! You can help the Trails Council by contacting your local elected officials and let them know that you support reconnecting the Wheelway.

What our local supporters say

“Bicycles” whether it is in the form of trail bikes, road bikes or mountain bikes has easily become the most popular form of recreation for guests at our three lodging properties in Emmet County. This is one of the forms of recreation that couples of all ages and families can participate at various levels of skill and fitness.
Keep in mind that these are not “budget” travelers. They stay in our top end rooms and they spend dollars in Petoskey and other cities at stores, restaurants.
-S. Reginald Smith, Chairman of Stafford’s Hospitality

The Little Traverse Wheelway (LTW) was pivotal in my decision to expand my company to Petoskey and paramount to the growth and success Latitude 45 has achieved over the past 19 years.  Getting arguably the most beautiful section of the LTW back online will be critical to our long term sustainability plan and we strongly encourage all government bodies to understand the importance of this trail to our regional economy.
– Christian Janssens, Owner & Founder, Latitude 45 Bicycles & Fitness

Nearly 10,000 people have indicated directly to us that they have an interest in biking in the Petoskey Area – and certainly many of those have ridden or want to ride the Little Traverse Wheelway. I have personally spoken to many guests who plan their trips around riding while they visit. And unfortunately, I’ve spoken to many who enjoy other trails in the area, but are shortening their trips to the region because of the washout on the Wheelway,
– Diane Dakins, Petoskey Area Visitors Bureau